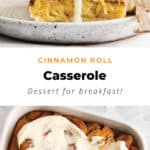 The cinnamon roll pieces are packed with cinnamon, vanilla, and nutmeg and topped with rich and creamy frosting, resulting in ooey-gooey deliciousness.

There’s nothing like starting your morning nice and sweet with the smell of cinnamon rolls! And believe me, this delicious breakfast casserole tastes JUST as good as it smells.

Just cut up your cinnamon rolls, place them in your casserole dish, and coat them in a cinnamon, nutmeg, and vanilla-flavored eggwash. Then, pop them in the oven and coat them in our deliciously rich cream cheese icing. Mmm.

why you’ll love it!

You only need a few essential ingredients to make these delicious cinnamon rolls:

Preheat the oven to 375°F and spray a 9×13-inch baking dish with nonstick cooking spray.

Next, cut each cinnamon roll into fourths and transfer them to your baking dish. Set the icing for the topping aside.

Add the milk, eggs, vanilla, cinnamon, and nutmeg in a small bowl. Whisk together until combined.

Then pour the mixture evenly over the cinnamon rolls. Bake uncovered for 20-25 minutes.

As the casserole bakes, prepare the topping. In a small bowl, add the icing cups and cream cheese. Mix using a hand mixer until thoroughly blended.
When the casserole has finished baking and cooled, evenly spread the topping on the casserole and serve immediately. Enjoy!

Make this cinnamon roll breakfast casserole your own by adding fun ingredients such as:

Nuts: Chopped pecans, almonds, or walnuts will give your cinnamon rolls a nice nutty flavor and crunch.

Bacon: Cook up some crispy bacon within the dough to give your casserole that savory-smokey taste that tastes AMAZING with the sweetness of the cinnamon rolls. You could even drizzle on some maple syrup to amplify it even more!

Sprinkles: Sprinkles will add an element of fun and color to your cinnamon roll casserole, making it perfect for a birthday cake!

Toppings: Swap out the icing or, in addition to the icing, top with fresh fruit, powdered sugar, or whipped cream. Yum! 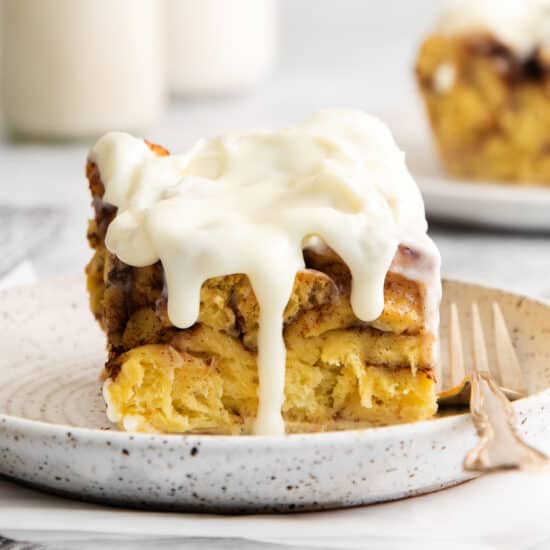 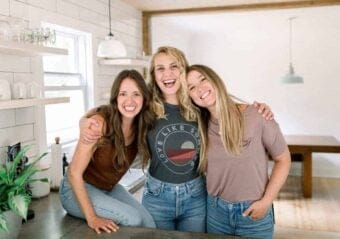 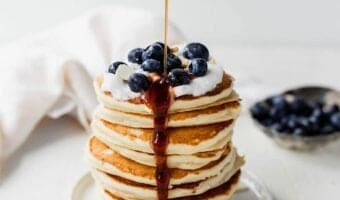